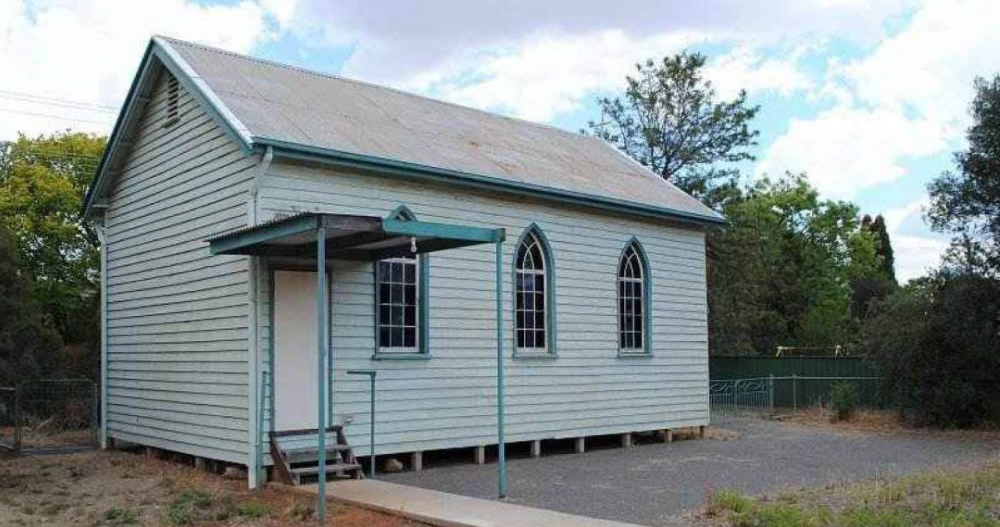 The township of Katandra West.

The Katandra West Irrigation Settlement was acquired by the Closer Settlement Board in 1920-22 and the land was subdivided into blocks of about 60 – 90 acres.  The Eastern Channel was completed and water became available in 1927.  The new township of Katandra West began to take the place of the original settlement at Katandra, now known locally as Old Katandra.

The first settlers to arrive in Katandra West were mostly of British origin, many of whom had never been on the land.  The farms were to be leased for a short time and then purchased under an agreement with long terms and low interest rates, and about 20 acres of each block was laid out to irrigate.  Most farmers milked 12-15 cows by hand, separated the milk, sold the cream and fed the skim milk to pigs and calves.  A few also kept poultry.  All farm work was done either by hand or with horses, and channels were cleaned out with a shovel.  Some of the farmers found the summer heat unbearable and the work too hard and thus were unable to continue farming at Katandra West.

A post office opened in 1927 and a school in 1928.  The township was beginning to develop with other farmers moving onto the vacant blocks.  Milking machines enabled more cows to be milked with less labor in the mid 1930’s and this increased the prosperity of the district.  Electricity was connected on 19 October 1945 and following the end of the Second World War an influx of settlers came to the area.  Some were ex-servicemen buying farms through the Soldier Settlement Commission and by the 1950’s a living was possible from a 60 acre block due to good prices from competitive butter factories.

The decision to build this church was taken in 1887 at a meeting of some United Methodist families.  The church was built in the north east corner of Four Corners, Pine Lodge North on the farm of Mr Doney, sometime between 1890 and 1895.

The Anglican families, then known as Church of England families, had been holding fortnightly services from 16 June 1905 in the Pine Lodge North School, and the Minister, visiting from Dookie, would make comments in the Service Register about the very bad roads and the very hot weather. There were several families living in each direction from Four Corners so when the opportunity to purchase the St Thomas church building occurred in 1913, they bought it for 100 pounds ($200).  In 1919, after World War 1, Bishop Armstrong, the first Bishop of Wangaratta, dedicated the church as St Thomas’ in the Parish of Dookie. On 18 June 1933 St Thomas’ Church closed for the duration of the winter, due to poor attendances, and never reopened.

Due to the shifting population following the release of irrigated farms, and the influx of English settlers, Church of England services were commenced in the Katandra West Hall in 1929.  These services were conducted by the Assistant Priest from Shepparton, or the Deacon resident in Tallygaroopna.

It was decided to move the building from Four Corners in Pine Lodge North to the new centre of population at Katandra West and in 1935, after harvest, St Thomas’ Church was dismantled in sections by a builder, named Harry Grist.  Assisted by the congregation at Katandra West the building was moved on flat top wagons and reassembled on the present site in Lincoln Street Katandra West.  In 1994 Jim Burgman recalled that Bill McConnell had several horse teams and flat wagons and that these were used to transport the sections of the building. It was difficult to move the sections of the building because the bridges at the channels were narrower than the loads on the flat wagons and the load had to be jacked up high enough to go over the top of these bridges. A small vestry room was added and on 31 March 1935 on Mothering Sunday, the second Bishop of Wangaratta, Bishop Hart, dedicated the Church as St Mary’s in the Parish of Shepparton.

By 1990 the building had deteriorated and was leaning to one side so the members of the congregation decided to raise some funds to repair it. The collection and sale of sheep manure was undertaken in 1990 – 1995.As there were no toilet facilities, it was also decided to try and source some existing toilets that could be moved onto the site.  In 1994 two toilets which were no longer required by the Ruffy/Terip Terip Hall, were collected for the Church.

The building was restumped, and the tiny old vestry on the eastern side was removed.  Old and broken weatherboards on the building were repaired and replaced and a small portable cabin was purchased from the then State Electricity Commission in Echuca and set up adjacent to the church as a vestry and meeting room. The six old plain glasses windows, covered in paper, were replaced with blue for Mary, red for the Holy Spirit and green for the Trinity.  They were also repaired and made so they could be opened.  Each new window was given by a local Church family. A stained wooden chair rail was placed around the inside of the Church and the Church was painted inside and outside.  New carpet was laid and a septic tank, concrete path and ramp were built. Following the refurbishment, the Rt Revd Bishop Paul Richardson re-blessed St Mary’s Church at Katandra West on Mothering Sunday on 26 March 1995, the sixtieth anniversary of the original dedication.

On Mothering Sunday, 14 March 2010, the Rt Revd Bishop John Parkes, Bishop of Wangaratta celebrated the 75th anniversary service of St Mary’s Anglican Church Katandra West. The anniversary cake was cut by Mrs May Wallden, the oldest member of the congregation.  She initially attended the services held in the Katandra West Hall and was a member of the 140 people attending St Mary’s Church when it was dedicated by the Rt Revd Bishop Hart on Mothering Sunday in 1935.

A special meeting was held on Monday 5 May 2014 to discuss the decision to close the church as there was no longer a financially viable worshipping congregation at St Mary’s Anglican Church in Lincoln Street Katandra West. The church building and land was sold and a new private home has been constructed on the vacant land and. extensive landscaping has been added to the property surrounding the heritage listed church building.

We acknowledge that our Parish Churches stand on traditional Aboriginal Lands. We pay our respects to elders past, present and emerging and affirm our commitment to the work of reconciliation.

LEAVE US A MESSAGE